To be honest, no kdrama is really thrilling me right now. Maybe it's because we're headed toward the end of the year with tons of award show preemptions to come. Maybe filming during a pandemic is too much. Maybe I just have bad taste in dramas, haha! 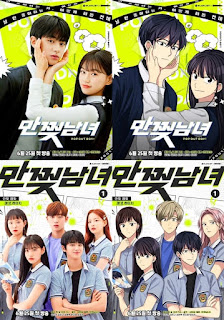 I'm an episode or so behind on most of what I'm watching, but the catch-up binge will come soon!
Dali and Gamjatang: I'm still loving this drama. I'm still hating the excess of side characters. First, the drugs. Really? Next, the super evil boss being Jang Tae-Jin? Sigh. Ahn Chak-Hee existing and being generally annoying? Ugh. But, again, the best part of this drama is when Jin Moo-Hak and Kim Da-Li are together. And so I push forward because all the moments between them are fantastic.
Side note that I don't think the aggressive arguing outside Moo-Hak's house that led to the slap and kiss were out of character. Moo-Hak has shown and told Da-Li his feelings and that he will wait for her. Meanwhile, Da-Li keeps going back to her ex, who is a terrible person to Moo-Hak (and in general). Of course he would get frustrated. And Da-Li does come off as wishy-washy and someone who will take advantage of the fact that Tae-Jin will do whatever she asks. I don't know if it was a translation error that people are taking the wrong way, but he's not saying that Da-Li is a prostitute; he's saying that she's letting herself be used to reach a goal. And why is it okay for Da-Li to put her pride aside to ask her ex for help when he (and Joo Won-Tak for that matter) is right there willing to do whatever it takes to protect her and her gallery.
Pop Out Boy!: ALMOST PARADISE!!!!! (If you don't know, Boys Over Flowers was my first kdrama, so all references to it will be welcome and hilarious.) I'm five episodes in, and I am having so much fun with this fish-out-of-water story and the references to the 00s. Why did we think certain things were cool? Or, why did we pretend some things were cool when they most certainly were not? This drama uses the typical high school formula with a girl who has two guys who like her, but I am enjoying the twist of one being a fictional character who came to life.
Ending Again: I thought this was a weird ending. The story focused so much on Chan In-Young and Yoo Chan-Hee's past that it was strange that she chose Do Yoon-Soo. I mean, it was obvious that Yoon-Soo was the better choice. I can't root for the guy who gave up his girlfriend to study abroad (again, cell phones and the internet exist), especially one who went through shady means to get it. Plus, he had been taking In-Young for granted for so long that they should've broken up anyway without the lame study excuse. I wish we would've focused more on In-Young and Yoon-Soo's cohabitation hi-jinks, especially since they slept together the night they met. Where was all the sexual tension? The awkwardness? The eventual closeness? I really wanted to know more about Yoon-Soo. Although, there is a prequel (titled The Best Ending), so maybe there's more there?
The King's Affection: I'm definitely thinking of this as a fusion sageuk, so I welcome the cheekiness and modern take on emotions. I'm saying this because there's a suspension of belief level you have to go into this with to find it enjoyable. I mean, it's super obvious that the crown prince is a woman, which would have also been super obvious to anyone else in Joseon times (or any time). Think of all the outdoor activities and states of undress that close contacts go through, especially in a time when you had to use nature, chamber pots, and outhouses to relieve yourself and lakes, streams, and barrels to bathe.
Initially, I thought that Grandpa Left State Councilor Han Ki-Jae would have immediately discovered that Young Prince Lee Hwi was inadvertently murdered and forced Young Palace Maid/Hidden Twin Princess Dami to take his place. I figured he was evil enough to perpetuate the lie to further his agenda. But I love that it was their mother's choice to have Dami take Hwi's place because that raises the stakes so much higher for everyone involved in Dami's secret. Also, Grandpa is super scary, and I can feel the fear he instills in everyone who dares to cross his path (or even thinks of crossing him). It takes something that could have been light and fluffy to something that is inherently dangerous for all.
I just hope that the writers don't write themselves into a corner because we all know it's impossible for Dami to rule over Joseon forever. Marriage is required and political, so there's no way that her secret would be safe for much longer. But in the meantime, I'm enjoying the love triangle that no one realizes they're in yet, as well as the mystery of who is trying to murder the Crown Prince.
Source: 1
at 8:00 AM