The premise of Ghost Doctor seems pretty simple: there's a doctor who is a ghost and engages in ghost shenanigans. And to be honest, I think that describes the first two episodes pretty well. It's been a while since I've seen a "check your brain at the door" drama that you don't have to think too hard about. Right now, it's pretty clear who most of the villains are, we see that our male leads have their own arrogance and hidden weaknesses, and each has a female lead to complete the square. 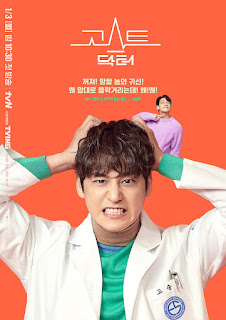 And let's be real. Most of us are watching for the eye candy and not the plot! My Kim Bum fan girling is no secret. An online friend noted that he has "that damned cocky grin" that's attractive, and I instantly knew exactly what she was talking about! Yes, that's what gets me every time. Aside from my obvious bias, I'm truly amazed at how youthful Kim Bum looks. He's 33, yet if you put him in a Boys Over Flowers reboot, I'd totally buy that he's a 19-year-old senior. (Everyone else from the original cast looks their actual age, so...) That, combined with his acting makes him totally believable as the fresh faced, first-year intern at the hospital.
Go Seung-Tak plays the part of the carefree chaebol who sweet talks/bribes the nurses and is just biding his time to get to the top so well that when he privately breaks down due to his insecurities, it really makes a mark. It's clear that Seung-Tak is smart and knowledgeable, but what trauma is stopping him from actually putting his schooling to practice? And why is he hiding behind the happy-go-lucky persona? There's much more behind the fact that he's pursing a doctor career outside of being disowned by his family.
Then there's Cha Young-Min, who is one of those annoying people who's exceptionally talented and knows he's exceptionally talented. You know the ones, with that "I'm better than you" cocky attitude who move through life expecting everyone to cater/listen to them. I find it ironic that he started along this prodigy doctor path by being possessed by a ghost and now he's the one doing the possessing. Young-Min's another one who's hiding his hurt and pain behind a carefully crafted veneer. We know that he's still hurt by Jang Se-Jin breaking up with him via disappearing abroad with her birth family, but I sense that there's more to his loneliness and pain.
What hasn't disappeared, however, is Rain's hotness. (Haha, you thought I was just going to leave it at Kim Bum.)  I'm too young to have experienced Rain's acting and music career when he was at his peak, so I'm really excited to see him in this. My expectations are high (within reason – the script my limit this), and I want to see what all the fuss is about. I'll have to put some of those older dramas on my watch list after this show is over.
Like I said, this is a "check your brain at the door" drama. I'm kinda sad that there are a few actors playing typecast roles, but at least I know that they will give a solid performance. I've missed some of the old school kdrama magic of pure chaos and predictable plots played by good actors to make fun television. It's the way the characters are played that make you love a drama, and I'm hoping that the story line isn't bogged down too much by the two attempted murder plots. Because I can see that the real story is with the relationships and the character growth: Seung-Tak and Young-Min, Young-Min and Se-Jin, Seung-Tak and Oh Soo-Jung, the interns and the staff.
Looking forward to the (haunted?) ride! 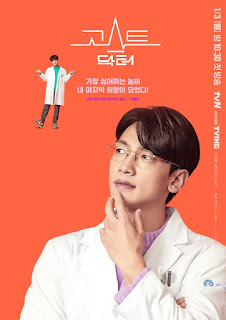