You Raise Me Up Mid-Series Review

When you see that Yoon Shi-Yoon is headlining a drama, you watch the drama. You Raise Me Up (유 레이즈 미 업 ) is a short, eight-episode rom-com that centers on a young man who can't *ahem* raise up and the woman who treats his um, shortcomings. 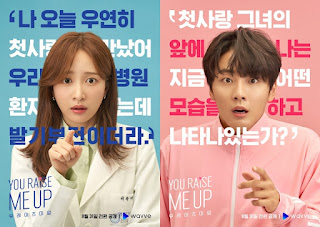 You must watch the intro because there are images of shriveled up objects and items blooming that will surely make you lol. There's also an alternative promo poster with a shrimp in a downward and erect position! Can't help but love a show that makes fun of itself. (This is a mid-series review up through episode four. Spoilers, of course.)
I felt a connection with Do Yong-Sik right away as a depressed man who is just trying to hide his insecurities and stay under the radar until he achieves great things. Unable to pass the entry-level civil service exam after many years, he works part time jobs just to pay for his apartment and growing pile of study guides. Luckily, he has a best friend, Jennifer, who also happens to be a fortune teller who is saving up for their gender reassignment surgery. (Jennifer is hilarious btw, and I love every moment they're on screen!) Unluckily, Yong-Sik keeps running into old classmates who are embarrassed by him and look down on him. All of this pushes him deeper into depression, to the point where he can't enjoy self pleasure and no longer gets "morning wood."
Jennifer encourages him to seek medical assistance, which leads him straight to Dr. Lee Ru-Da's office. In another round of bad luck, Ru-Da happens to be his first love (and him hers). After several rounds of embarrassment, Yong-Sik agrees to Ru-Da's treatment plan. Problem is, she's doing it to get back at her asshole boyfriend, Dr. Do Ji-Hyuk (a psychologist), who won't let her break up with him because he's a gift to the world and no one can't possibly be better than him. Seriously? Please kick him straight to the curb, do not pass Go, do not collect $200. Ru-Da somehow secretly believes this because the couple apparently go through this faux break up thing all the time, even though they've only been dating for 18 months. Also, she's a successful doctor, he's a successful (and arrogant) doctor. There are plenty of other successful doctors out there for her to date besides Ji-Hyuk.
Anyway, I love Ru-Da's non-traditional way of treating Yong-Sik's condition. I enjoy the pettiness in front of his rude classmate and his ex-girlfriend. On the other hand, Ru-Da and Ji-Hyuk were super unprofessional and unethical in treating him. Ji-Hyuk coincidentally found out that Yong-Sik was Ru-Da's first love, takes Yong-Sik on as a patient, and accidentally-on-purpose exposes Yong-Sik's pitiful life that he'd been hiding to Ru-Da under the guise of a treatment plan. Since Ji-Hyuk is jealous of Yong-Sik's past self (because Ru-Da says that he's better than him and, of course, there can't be anyone better than the fantastically self-absorbed Ji-Hyuk), he makes a bet that Ru-Da can't solve Young-Sik's impotence in a month. Pride on the line, Ru-Da agrees.
I'm really glad that Ru-Da's sister, Lee Ru-Ri, jumps in and calls her out on playing with a person's emotions because Ru-Da thinks that the end justifies the means, and that's simply not true when you're talking about people's lives and confidence. Of course, just as Yong-Sik starts to get his confidence back (but not quite his little Yong-Sik yet), he finds out that Ru-Da wasn't helping him out of the kindness of her heart or because they never got to date in high school. I'm not looking forward to the depressive and potentially destructive episode he's going to go through now that he knows. I just hope Jennifer is there to get him through and pick up the pieces. When Ru-Da acts like this, it's easy to see why she's dating Ji-Hyuk because they're two sides of the same coin. Their arrogance may play out in different ways, but they're both good at hurting people to make themselves feel better.
The drama alludes to past trauma that is the foundation of Yong-Sik's medical issue. They naturally believe it was the harsh break up with his ex (she literally told them that he wasn't good in bed and she was tired of pretending), but I'm guessing that it has to do with the accident that happened when Yong-Sik and Ru-Da were out together in high school. That incident is what made Ru-Da's parents send her to study abroad, but I think it also started Yong-Sik's downward spiral. It was briefly mentioned that something happened to his family senior year so he had to take up a part-time job and didn't have as much time to study, but I think that's an excuse he held on to for years as he kept failing and fell further from his class president glory days. It also explains his obsession with the color pink, because it reminds him of Ru-Da's hoodie as teens, and that's what gives him comfort. It's not the pink, but Ru-Da. And since he didn't have her, he had the color he associates with her.
The drama's pacing is good, and I feel like the episodes fly by. I appreciate that they talk openly about Yong-Sik's physical and psychological medical issues so that his impotence doesn't feel like a joke. The drama could have easily gone that route, especially with the light-hearted scenes about it, so I'm glad they took a direct and professional approach, notably when Ru-Da is treating him. Like I said, I enjoyed seeing people get their comeuppance, and I can't wait for Ji-Hyuk to be taken down a few pegs. To be fair, Ru-Da needs to get off of her high horse as well, but as the lead, I'm sure her regret will come quickly and she'll change for the better.
Source: 1
at 5:33 PM

Email ThisBlogThis!Share to TwitterShare to FacebookShare to Pinterest
Labels: Blogging, Hana, Recap, Review, Yoon Si-Yoon, You Raise Me Up