I've officially become *that* viewer. You know, the one who sides with Elsa over Anna. (No, young lady, you cannot marry the random man you just met!) The once optimistic Spongebob has turned into the cynical Squidward. 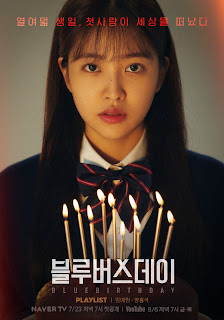 Get comfy as you prepare to hear me ajumma nag about some kdramas!
Backstreet Rookie: Okay, Choi Dae-Hyun's confession was super sweet! But that still doesn't make up for the icky relationship, especially since Dae-Hyun remembered saving 10-year-old Jung Saet-Byul. I know a lot of people are saying that they're in loving relationships with a big age gap in real life, but if one of you was a minor (child) when the relationship/courting started, the older person in the relationship was either grooming the minor, is a child predator, or both. Sorry. Now if you both met as consenting adults, then no problem! But adults have no business dating or romantically kissing children. Because Backstreet Rookie insisted on playing that angle (even after the network was fined for airing an inappropriate relationship on network TV), I can't get down with Dae-Hyun and Saet-Byul as a romantic couple. I still like the characters as standalone people, and I do love the friends and family who surround and support them in various ways.
Blue Birthday: Did not expect for Ji Seo-Jun to be in on the time travel thing. It was always obvious that he liked Oh Ha-Rin even though he tried to hide it, but now it shows just how much he cares. I'm wondering if it was initially Ha-Rin who was fated to die but Seo-Jun died in her place as a consequence of time traveling so much to protect her. Since they're dating in the alternate timeline where Seo-Jun survives, it's clear that they're meant to be together, so teaming up when they both know the rules, are aware of the time travel working against them, and they're doing it so they both have no regrets is probably a good thing at this point. My theory? I think Kim Sin-Wu is a red herring and it's actually Cha Eun-Seong who killed Seo-Jun because he was jealous that Ha-Rin liked Seo-Jun instead of him. (And he even asked Seo-Jun directly if he thought of him as a friend, which shows Eun-Seong was doubting Seo-Jun's feelings.) I think it's only going to get worse now that Eun-Seong has overheard them talking about time travel. More unintended consequences to come.
The Great Shaman Ga Doo Shim: Okay, I love Na Woo-Soo. Although kinda flat and snobby (except to Kim Il-Nam) at his first introduction, he's quickly grown into a good companion. He's thankful to those he should be thankful to, and loyal to those who deserve his loyalty. I like how he gave Ga Doo-Shim a real hug to make up for the possessed hug he doesn't remember. Woo-Soo is genuinely interested in her life and her abilities, and has already stood up for her time and time again. As suspected, ghostly shenanigans abound, and I'm enjoying Ghost Hyun-Soo's cheekiness.
Monthly Magazine Home: Why are we bringing up new backstory in the last episode? If you haven't told your story by the finale, it's too late! Everything new in a final episode is always just shoehorned in as a plot device. The father story line was unnecessary at this point, and didn't carry the emotional weight it could have. And why does Young-Won accept her father back unconditionally but not Ja-Sung? Ja-Sung said the past didn't matter to him, especially since Young-Won had nothing to do with it, yet she creates this imaginary angst claiming that the past actually does matter to him but he just doesn't realize it. Huh? Now I'm totally on Ja-Sung's side because he finally started to grow as a person on his own, then here comes Ms. Noble Idiot to blow it off completely. I feel bad that we spent so much time on their star-crossed relationship and not enough time with the rest of the editorial team. Thank goodness this is over.
Who Are You – School 2015: Since there may be a School 2021 coming out later this year, I decided to find another one in the School series that I haven't watched yet. I'm a little confused with the whole birth secret twin thing, but it's only the first episode. I feel bad that Lee Eun-Bi was such a strong, stand-up person for her younger "siblings" at the orphanage, but she couldn't be that person when it came to herself. Although it appears that she's going to assume her long-lost twin's identity, I hope Eun-Bi is able to grow her confidence and heal so she can actually become the role model her siblings can look up to instead of just pretending to be strong while falling apart inside.
Vincenzo: Can I be more in love with a show? (Yes, I finally got my Netflix fixed for good this time!) I also love a man in a suit, so I don't think I can be more in love with Vincenzo himself, either. I do have to say I'm annoyed with Jeon Yeo-Bin as an actress, though. She completely overacts the part when Hong Cha-Young is showing her eccentric side. She's good when Cha-Young is serious, but horrible when Cha-Young is goofy. My other complaint is that I think this would be much better as a straightforward noir crime series instead of a sometimes slapstick comedy with budding romance. (The light comedic touches are fun, though, like the running gag with the Italian restaurant.) But we've already messed up the timeline from episode 1 in pursuit of love, and I'm worried that it's going to get us more off track. (At episode 7, it's been way more than 72 hours since Vincenzo landed in Korea, yet the plaza still stands.) Sometimes I just want to see a drama where the lawyers, cops, prosecutors, or whomever just kick ass, arrest/convict people, and overall do their jobs. Vincenzo is his best when he's blowing things up and causing murder and mayhem. Because I'm really just here for the action. And Song Joong-Ki.
Source: 1
at 6:30 AM