With one drama coming to its end next week, I picked up another short drama to distract me while I wait for the episodes to air. Plus, my final thoughts after watching 30 episodes of another. 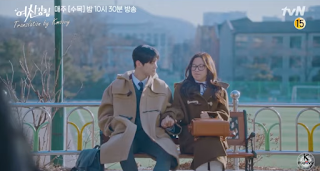 In no particular order...
True Beauty: WHY IS THERE A TWO-YEAR TIME JUMP. WTF? I hate how kdramas fall back on this trope. Why can't anyone leave the country for just a couple of weeks? And do phones and internet not exist outside of Korea? I'm pretty sure America has both. Why can't couples communicate during this time? I think this is a product of lazy/poor writing. Just resolve the issues that need to be resolved instead of relying on time to pass to fix things. Problems aren't going to realistically disappear because they were never appropriately addressed. It's just a band aid plot device.
Aside from just being STUPID in general, there was so much more story to tell in high school. We literally end their time there the day Ju-Kyung finally stands up for herself, reveals her relationship with Su-Ho, and confronts Su-Jin? Really?
Although I'm glad we didn't have to deal with Daddy CEO drama too much, I'm mad at the way he was used as a plot device here. Did we really have to re-traumatize Su-Ho like that? Missing a phone call right before a love one dies/almost dies? Really? And it's 2021. What high schooler doesn't have a phone permanently attached to the body? I'm not in high school but you better believe I'm running back home once I realize I've forgotten my phone (which would take 2 minutes, tops).
I am happy that Ju-Kyung's classmates supported her in the end. They were rightfully shamed by Teacher Han. I'm glad that my initial assessment that her new friends (minus Su-Jin) wouldn't abandon her for showing her bare face. It was nice to see pretty much everyone saying her face looks pretty much the same with and without. And thank you Soo-A for finally telling her to go see a dermatologist!
I'm still mad that Su-Jin had a personality transplant halfway through. Now that we know her backstory, it makes sense why a stressed out and abused teenager would lash out the way she did. My gripe is with the writers who withheld that information completely for the first 10 episodes. (Yes, she vigorously washed her hands, but we were never shown why. Was it a mental or physical disorder? Childhood trauma? We didn't know!) And like I've said before, it was briefly hinted that Su-Jin and Su-Ho were long-time friends, but again, never shown. This part of the drama would've been that much more impactful if Su-Jin's backstory had been weaved in all along. Because she makes a great frienemy. But since she became an overnight b!tch, I really don't care about her redemption arc if she gets one. If we had been clued in from the beginning, I would've rooted for her, even if her and Ju-Kyung could never be friends again. 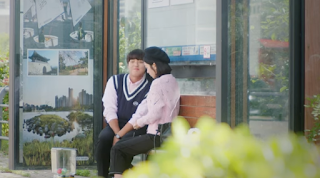 Love Revolution: I'm so mad at the non-ending of this story. I was going to do a series review, but it's totally not worth it. It feels like the cast showed up one day and said, "we're tired of this, let's just stop," the crew said, "k," and then everyone went home. And how do you introduce a new character in the final minute?
The only full story arc in this drama is Gong Joo-Young and Wang Ja-Rim. Which I guess is fine since that's how this story started. But if that was the point, then it should've been more about them and less about the intimate details of all their friends. Because now I'm invested in their story lines and will not get a resolution. If you're angling for a second season, fine, but at lease give some sort of closure for this first season instead of abruptly ending. It felt very much like KPOP: The Ultimate Audition, except that Love Revolution was planned to end when it did.

Mr. Queen: This show is getting good, although the one hang up is the one I keep repeating – there are too many stories in one drama. I need the writers and directors to decide which story they want to tell and stick with it.
I have to say that I'm totally over Jo Hwa-Jin. It was one thing to hate So-Yong because you're rivals, s/he is stealing your man, and you're hiding a secret, but it's another thing to gloat about the death of a child. Line officially crossed. She's gotten to the point that she's blinded by jealousy and can't tell that she's being used by the Queen Dowager & Co. She started off being a worthy rival, but now I'm cheering on your downfall. I hope it's hard and abrupt.
And that's not to say blinding jealousy can't be useful. Creepy Cousin Byeong-In is 100% acting out of jealousy and hurt feelings, but he's a real opponent and it's interesting to watch him descend into villainy (aside from obsessive creepiness).
I am surprised that the show revealed that Cheoljong had no idea So-Yong had a hand in the banquet. I thought for sure he recognized his/her crappy handwriting and was joyfully and thankfully playing along. I mean, where did he think the word "McDonald's" came from? It cetainly didn't exist then. That definitely would've been an entry in The Queen's Dictionary. (Side note: I found that bit especially hilarious because McDonald's and Baskin-Robbins were in my Korean vocabulary list that week.) I guess they're going with the angle that Man-Bok may not have good handwriting or a grasp of Chinese characters since he's a servant, but again, all signs point to the queen.
There were a lot of interesting and poignant moments in last weekend's episodes, along with some great reveals, but I really want to wait to get into it until we learn more this week. 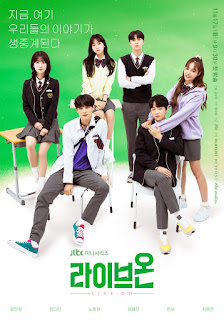 Live On: I was looking to pick up something after finishing Love Revolution, and at eight episodes, I figured I'd give another Viki Original a shot. I'm already a third of the way into the final episode and want to give a full review to the series, so I won't say much.
I will say that the main characters are endearing and I enjoyed watching them. I felt like the big drama was really paper thin, and I don't really buy Hee-Soo's reasoning for cyberbullying Ho-Rang this whole time, but aside from that, she was a good bad guy who played on all of Ho-Rang's insecurities.
I do love the reluctant friendships that Ho-Rang forms along the way, and I think her and Eun-Taek are absolutely adorable together. Looking forward to drama this ending with a nice, neat bow.
Sources: 1 2 3 4
at 7:49 PM