After 16 episodes, it's time to say goodbye to True Beauty. It was a fun ride, but I have a bone to pick with the ending that leaves me wondering why we just can't have nice things.

My question from last week remains:
WHY IS THERE A TWO-YEAR TIME JUMP? WTF? But before I dive into why there wasn't a need for a two-episode epilogue, I do want to highlight what I enjoyed about this drama.
I loved that this was a straight-forward high school drama. Sure it's formulaic, but there's a reason why we use formulas: they work. It was light, breezy fun but with a lot of heart. True Beauty took on the themes of bullying, tragedy, and self-acceptance and did them justice. I thought it made a lot of sense why Su-Ho and Seo-Joon turned on each other after one side of their bestie triangle died, and their road back to each other was fun but poignant. Although contrived, the boys sharing a hospital room – seeing each other struggle, being reminded how they used to be so close by Seo-Joon's mom, and overhearing Su-Ho's outburst with his dad – re-cemented their bond. But to be honest, they always secretly looked out for one another even after they stopped speaking to each other directly. I'm so glad that a girl didn't tear them apart (some male posturing aside, of course), and that they were open about their feelings even when they knew the other one wouldn't like what was said. They had their own true beauty of friendship wherein they encourage each other in life.
Although their wedding was unnecessary filler, I like that Teacher Han and Big Noona/Unni Hee-Kyung stayed together and true to themselves. I do wish the story spent a little more time on their disagreement with wedding attire, though. I would've like to hear Hee-Kyung apologize for being distracted during something that was important to her husband-to-be. She was the one who encouraged him to speak up and not hide his true self from her, and it would've been nice for Teacher Han to share a life lesson on active listening with her. I also disliked how Ju-Kyung was completely uninvolved and uninterested in her unni's upcoming nuptials. After the grand family moment that they need to pay attention to each other more after her bare face exposure, her literally blowing through unni's celebration was disappointing. But I loved that Su-Ho's wedding gift to Hee-Kyung was a box of power tools! It was *perfect* and so true to her character! She never liked frilly things, and I'm glad they weren't pushed on her just because she was getting married. 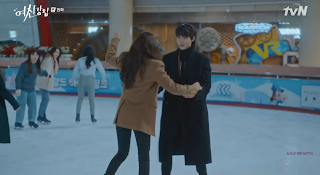 On to our second male lead, Seo-Joon. So many people had Second Lead Syndrome, and it's not hard to see why. C'mon, their ice skating date was ADORABLE. Personally, though, I was never on board his ship, and I'll tell you why. Yes, Seo-Joon is a great guy. He obviously wouldn't have had a problem with Ju-Kyung's bare face, as was shown by his non-reaction when she was exposed, thanks to his little sister who has a similar skin condition whom he loves deeply. He was kind, thoughtful, and was always there to help her out or give her a shoulder to cry on. The problem was that he wasn't the right guy for her. And that's all that matters.

Ju-Kyung needed someone who has gone through the struggle of being an outcast and who knew the feeling of the person you thought was your friend turning on you. For Ju-Kyung, that was her bare face and being abandoned by Joo Hye-Min during her peak embarrassment. For Su-Ho, that was losing Jeong Se-Yeon and being blamed for his death by Seo-Joon. The two of them grew and healed together, all while openly (for the most part) sharing the parts of themselves that they kept hidden from the rest of the world. Su-Ho always let Ju-Kyung set the pace – even when he didn't fully agree with it himself – because he knew just how big a small step felt to her. He was considerate of her fears and budding confidence, always standing by as silent support. Aside from that, Ju-Kyung and Su-Ho have common interests and both cherish the small things in life. Even without the trauma they're a good fit, which makes their bond that much stronger. 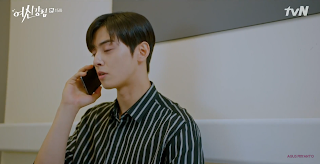 And then comes the finale week to ruin it all. I guess I wouldn't say ruin, but it was wholly unnecessary. It felt like an insanely long epilogue that no one really asked for. First of all, why harsh international break up? I do understand where Su-Ho is coming from, though. He thought all was good and was literally about to board a plane back to Korea when his dad needed emergency surgery again. Everything probably seemed hopeless and endless to a scared kid who had just started on the path of reconciliation with his only family. It didn't help that he was re-traumatized with the whole missed phone call craziness, either. And since he's so considerate of Ju-Kyung's feelings of doubt, he was probably scared that he was hurting her by being gone indefinitely, especially after finding out that she too was hospitalized. It was honestly too much for Su-Ho to handle on his own. I just wish that the break up was more organic and they at least tried to work it out first. It was cute how Ju-Kyung was waiting for his 3 am call, and I wish they got a few more of those in to show how the time difference and life experiences were too taxing for high school students. If after showing Ju-Kyung falling asleep in class, Su-Ho's exhaustion from caring for his dad, and unintentional missed calls one or both decided to break up, it would've made more sense narratively. 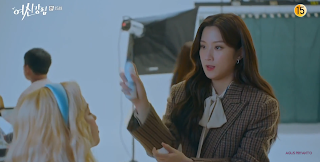 But instead, we jump two years ahead and everyone has moved on with their lives after Su-Ho literally ghosts Ju-Kyung after that break up call. Ju-Kyung has a great internship at her idol's studio, the high school gang are all still friends (minus Su-Jin, more on that later), and Seo-Joon has gone back to training at the entertainment company and is about to debut. This is why I'm upset at the (super obvious) fake out at the end of Episode 14 where a doting and protective Seo-Joon comes to pick up a drunk Ju-Kyung. It's shown in these final episodes that he's continued to integrate himself as part of the Im family and treats her like a girlfriend. But is not. This is where an episode about their senior year would have been helpful to establish whether they were dating, tried dating, or were just really close friends and why.
I feel we do Seo-Joon a disservice here (and So-Ho if we're being honest). Seo-Joon never got to have his true confession until Su-Ho magically reappears, and I feel that's unfair. It made sense when he failed to confess to her (with Su-Ho's permission) in high school because he cared for her so much and also greatly appreciated his friendship with Su-Ho. But with Ju-Kyung being single for two years, Seo-Joon should have been given the chance to share his feelings and allow her to process them independent of Su-Ho. And it doesn't really matter whether they went on a few dates, dated for real, or just remained friends. It matters that they both get to be autonomous people and make decisions on their own. It would've made that fake-out scene at the restaurant much more relatable to the audience. I mean, we all knew that Seo-Joon and Ju-Kyung wouldn't end up together in the end regardless of what would or could have happened if Seo-Joon got to confess (especially with their younger siblings finally dating each other (and btw, Im Ju-Young should've passed his exams because it was established when the siblings transferred to Saebom High that he was smart, but whatever)), so why not? The whole meaningful plot point of settling your feelings got tossed out the window by not letting that happen. 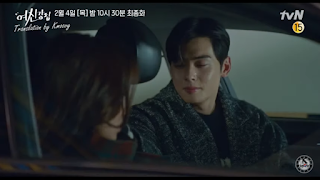 And then, Su-Ho literally shows up out of nowhere and swoops in to get the girl. I'm sorry, but how? It wasn't established that Su-Ho (or Ju-Kyung for that matter) would show up at Namsam Tower on the first snow until 10 seconds before it happened. It's like the writers went down the Kdrama Trope Checklist and realized they hadn't done that one yet. The notes on the comic book store wall was a thin reason to go there to begin with, because we always saw child Ju-Kyung's message but not the rest until it was convenient in the final stretch. Maybe if they had emphasized the significance of their childhood meeting (and friendship?) it would have helped, and it would have also been a point to Su-Jin that she could never be the one in Su-Ho's heart (aside from everything else that was extremely clear, but of course, the trope checklist). It also fails to give Su-Ho a real opportunity to earn Ju-Kyung's forgiveness for breaking up. Even though it's obvious they still care for each other, they needed to sit down and talk it out in order to cement the restart of their love story.
Speaking of Su-Jin, what kind of non-redemption redemption arc was that? We get a glimpse of her raising money for kids in Africa on the sidewalk, a round kick to a bratty celebrity, and then it's all smiles and hugs? Huh? It was just briefly mentioned in a quick flashback that Su-Jin dropped out of high school, but we didn't even get to see her leaving. Again, based on how they wrote her character in the second half, I don't think she deserves redemption and she can continue to kick rocks barefoot, but at least give her a real chance. I would have liked to see her work at atoning for her actions in front of Ju-Kyung and having a real conversation with Su-Ho, Seo-Joon, and Soo-A about her behavior. But instead it was just like, "Aww, it's okay that you sucked as a human being; pretend it never happened." Su-Jin is a tragic character, but also someone who deserved more. 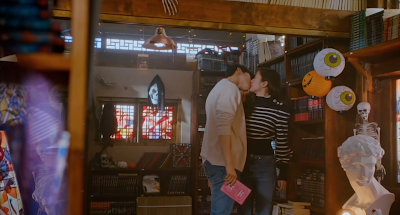 But aside from the writing and directing missteps in the last two episodes, True Beauty as a whole was a good series and mostly satisfying through Episode 14. I'm so happy that Ju-Kyung came into her own and continues to be a beautiful person inside and out. Her and Su-Ho deserve their happy ending, and it was fitting to end the series where their relationship began: in the comic book store.
Sources: 1, 2, 3, 4, 5, 6
at 3:10 PM