I considered writing some mid-series reviews this past weekend/this week, but I had a pretty terrible weekend and all the coherent thoughts I had are all jumbled. Such is life! 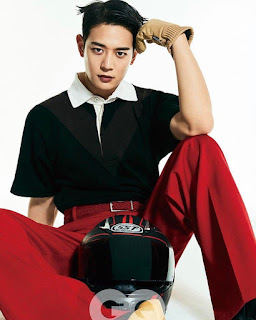 So here are my thoughts of the week instead:

Mr. Queen: Finally! This is the action I'm looking for! This show was spinning its wheels a bit, so that wonderful cliff hanger at the end of episode 13 is the jump start this series needs. I suspected something was going to happen to undermine the king's show of authority, but I didn't expect an explosion directly in his face! I hope it also brings creepy cousin's love for So-Yong to his/her forefront so it can be dealt with.

Seriously, can we please address creepy cousin for a second here? Byung-In is obsessive and possessive of So-Yong, and there's nothing cute or swoon-worthy about it. From what's been presented to the audience thus far, there is no indication that original So-Yong ever reciprocated his feelings/advances. To me, it looks like Byung-In took advantage of her emotional and vulnerable state the night of the lake incident, and she only accepted his kiss because what else was she supposed to do? Yes, she was always happy in front of him pre-palace life, but she always looked at Cheoljong. Nevermind the fact that they're cousins who grew up like siblings. (The whole adopted cousin thing is irrelevant because, again, they grew up close together as a family.) Of course she trusts you! But you violate that trust every time you cross the line! And I know this is a time period where it may have been acceptable to marry your cousin, but that's not okay by this show's universe, based on the comic relief cousin saying so (directly to Byung-In, no less!). So please stop shipping these two as a couple; it's gross.

Now that I've gotten that off my chest, woo sah! I still think Mr. Queen is at least four shows in one: chef time travel, body swap hijinks, story of reluctant but meaningful love, and undercover ninja king. These would be great shows on their own, but it needs to pick one and stick with it. We're at the point where it's becoming really disjointed as we hop from one plot to another. Let's hope this past weekend's episodes jumps starts it into one direction.

True Beauty: I'm up to episode 10, holding off on 11 and 12 until I write this. Although I really enjoy this drama overall, I will be using this space to rant a bit, lol. First, I'm not happy about the kdrama pedestrian car accident trope being used (with double the fun). But I appreciate that we need a true catalyst to get these boys together. There have been hints at reconciliation, but they're not ready yet. Even the music company stealing their music (ugh, not ready for boring adult drama with Daddy CEO) wouldn't be enough because Seo-Joon would just blame Su-ho for everything again, which gets us nowhere.

On the girls' side, I hate how they made Su-Jin such a catty, bitchy character out of the blue. She spent most of the series hanging out primarily with Ju-Kyung and Soo-A, but suddenly she's inseparable from Su-Ho and doesn't care about Ju-Kyung at all. There's no set up for this; just a personality transplant. Then she does everything possible to make Ju-Kyung break up with Su-Ho, even though Su-Ho has explicitly said he's only interested in Ju-Kyung and doesn't like Su-Jin.

Speaking of which, I am so disappointed in Ju-Kyung. Su-ho bent over backwards to hide their relationship at her request and is somehow surprised when he gets justifiably jealous of Seo-Joon. And you're really going to break up with someone you're already dating just because your friend likes your boyfriend, even though your boyfriend doesn't even like that friend? Like what?

At least the role reversal relationship is still fun. It's the only adult story line that I can be interested in.

Love Revolution: I'm in the middle of episode 21 and I'm kinda happy I'm near the end even though I'm always pleasantly surprised how quickly each episode flies by. I almost gave up before episode 10 because Ja-Rim being rude and overall unlikable was spoiling the fun. (She had legitimate reasons, but she often overreacted to innocent gestures, dated Joo-Young even though she clearly didn't like him, and was just plain insufferable.) The will they-won't they date plot dragged on for far too long, and I didn't think I could stand watching it for 20 more episodes.

My new bone to pick is with Min-Ji. Congratulations for setting up your acquaintance with your crush. Now he's dating her, they're cute together, and now you're sad.

In non-drama news... In case you haven't been paying attention, my favorite kpop group is SHINee. My bias, (Choi) Min-Ho came back from military service and created an Instagram! ❤ Thank you kpop angels for shining down on me! (No pun intended.) His most recent photoshoot has him looking much more grown up, and I like it. I hope he picks up a drama to act in while we wait for whenever SHINee's comeback will be.