Mr. Queen (aka 철인왕후 aka Queen Cheorin aka No Touch Princess) is the newest fusion sageuk comedy, and I have to agree that it's full of laughs. 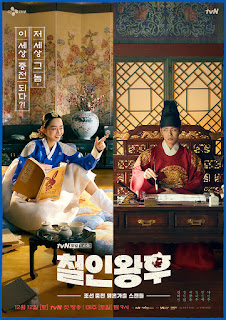 Sageuks can be difficult for the non-Korean speaker (and sometimes native Korean speakers, depending on the era portrayed), as they speak high-honorific Korean with emphasis on Chinese Hanja at times. But I find this particular fusion to be very accessible, mainly because of the modern-historic plot.

Jang Bong-Hwan is a present-day famous chef (and playboy) who is framed for an international meal faux pas. He accidentally falls off his balcony into the swimming pool below, hitting his head on the bottom. When he opens his eyes, a woman in a hanbok is swimming toward him and kisses him. He subsequently wakes up in that woman's body, who happens to be Kim So-yong (who becomes Queen Cheorin a couple days later) from the Joseon dynasty.

Once he figures out where he is and pieces together who everyone thinks he is, Bong-Hwan tries desperately to get anyone to listen to him so he can be sent back. But everyone sees him as Cheorin and thinks she's crazy, as a side effect of falling into the lake and being unconscious for more than a day. For the next several days he/she spends every waking moment looking for ways to get back to the present. Smartly linking the body switch to the underwater kiss, he/she seeks out any body of water (the lake has been drained for her safety) to dive into, which doesn't work. 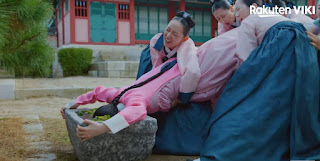 (For the sake of this review, going forward, I will refer to Bong-Hwan as Queen Cheorin as long as he's in her body, unless it's necessary to point out the difference. I will use "s/he" and "him/er" shorthand (instead of "he/she" or "him/her") to signify that it's him (he) in her (she) body. I don't think they/them is appropriate, since they are both heterosexual and cisgender in their own bodies.)

In between scheming to get the lake refilled, s/he starts to piece together what happened to Queen Cheorin leading up to her ending up in the lake. S/he also randomly has visions of the queen's memories, but not enough to make sense of what exactly happened. S/he also begins to make use of the kitchens, as s/he doesn't find the Joseon food palatable.

Meanwhile, King Cheoljong (Lee Won-Beom/Yi Byeon) is merely a puppet king whose mom and her people rule the court. We soon see that this is all a façade, as he has a secret ninja battalion that seems to be secretly working on righting some of the wrongs that have happened thanks to his court. Queen Cheorin quickly figures out that there's more to King Cheoljong than he's letting on, so s/he has to be careful around him.

Of course, all the political machinations are in play, and although they seem to be pretty typical for a sageuk, pieces aren't always put together in a linear fashion. I admit that I'm lazily following the political intrigue, mainly because it's Christmas break and I really want to check my brain at the door with dramas right now. I am able to see that the enemy story line would actually be fairly interesting, and there are people who aren't as good or bad as they seem right now. If you're into it, I think it would be fun to figure out who is on what side throughout the drama.

The comedy is enough to carry me through the court dealings, though. So if you're like me and don't want to (or can't) follow the political stuff, it is a fun watch. Actress Shin Hye-Sun is amazing here, and she truly embodies the stereotypical male mannerisms, which make you truly believe there's a man stuck inside her body. Her physical comedy is just as funny as the dialogue. I hope the fun stays through the entire run.

Mr. Queen is another tvN drama, which runs through February 14th, 2021 on Saturdays and Sundays.