I have a soft spot for high school dramas, maybe because Boys Over Flowers was my intro into kdrama. Four episodes in and True Beauty (aka Goddess Advent aka 여신강림) has already captured my heart. 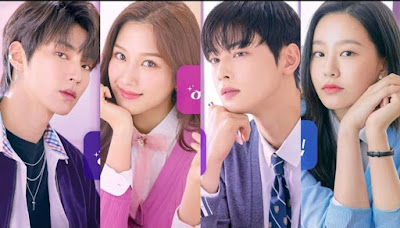 Starring Moon Ga-Young as the lead character Im Ju-Kyung (pink in above image), True Beauty is based on a popular Korean webtoon with the same title.

Im Ju-Kyung has such a sunny look on life that you can't help but root for her. Despite everyone calling her ugly – even her own family (wtf?!) – and teasing her for her looks, she still has a positive attitude and hobbies she enjoys. (And tbh, she's just a plain teenager with rosacea and glasses too big/thick for her face.) But Ju-Kyung's sunny disposition is shattered when the lead b!tch at school can't stand a guy she doesn't even like give positive attention to Ju-Kyung and convinces him to rudely reject Ju-Kyung on camera, which is promptly replayed in front of everyone.

Humiliated, Ju-Kyung goes to the roof of a building (are rooftops really so easily accessible in Korea???) and contemplates jumping off, but a memorial billboard of a kid who tragically jumped when he was her age stops her in her tracks. At the same time, Lee Su-Ho sees her on the ledge and dramatically pulls her down and lectures her about staying alive, comically carries her downstairs (broken elevator and Ju-Kyung's glasses fell off the ledge when Su-Ho pulled her), and sends her home.

Unbeknownst to Ju-Kyung, her mom just found out her dad made some bad investments and have loan sharks after them. They need to sell their fancy apartment and move back into their old home (which they weren't able to sell when they moved to the apartment) to cover his debts. She walks in to see her family in hysterics and, thinking that they heard her farewell voicemail, she cries that she's sorry but she's so ugly and needs to switch schools because she's too embarrassed to go back. Wish granted, but she doesn't realize the true reason why.

Before she switches neighborhoods and schools, she goes down the internet rabbit hole and learns how to do her own make up to transform her face. She's subsequently seen as one of the most beautiful girls at her new school. Of course this is the same school Su-Ho attends, because kdrama, and now she struggles to keep her bare/ugly face under wraps. With her younger brother and Su-Ho around the school/neighborhood, it gets harder (and more hilarious) to keep her dual faces a secret. 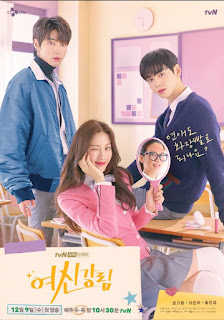 The fun things about this drama are the zippy scenes that keep the story moving. I feel like we've learned so much about our leads in the first two weeks, and it's never been draggy. This could've easily been another My ID Is Gangnam Beauty, especially with Cha Eun-Woo and Park Yoo-In playing similar roles, but it's so much better.

For starters (My ID Is Gangnam Beauty spoilers this paragraph), the lead has a real personality outside of "I'm just ~so~ ugly and idk how to be pretty now that I made myself ~too~ beautiful and I'm ~so~ sad about it and no one, not even the viewers, can see my old face because it's ~so~ ugly." Ju-Kyung has real friends who treat her like a person (aside from that one fake, also ugly friend from her old school) unlike Kang Mi-Rae in Gangnam, and I don't foresee her new friends doing a 180 if/when her bare face is revealed. I also find the budding love triangle between the girls and Su-Ho believable (although, they need to give Kang Su-Jin more backstory aside from the hints that her and Su-Ho are lifelong family friends), while in Gangnam, I never believed that the second female lead had a chance. I do hope that Cha Eun-Woo gets more lines here, because he's been typecast as this silent, broody, rich male lead. In both dramas, I felt that the male lead had more story to tell, so I hope that's coming in True Beauty. (Plus, his *voice*)

This is also giving me School 2013 vibes (School 2013 spoilers this paragraph), which is another drama I loved (I even have a promotional poster that I won from a local Korean broadcasting station!): from the good-looking best friends turned enemies, to the endearing teacher, to the bonding that the classmates go through together. Plus, Hwang In-Yeop is channeling a lot of Kim Woo-Bin here, and I love it. I'm hoping this drama leads to an epic bromanace, too.

Aside from the parallels with other dramas, there are things I like and dislike thus far. My obvious dislike is how Ju-Kyung's own family treats her like the ugly duckling. The pressure to 'be a good student since you're not a looker and won't be successful unless you're smart' obviously backfired on her parents, and that serves them right. Mom can be funny, but I find her mostly annoying. I don't mind that she rules the roost or that she's the breadwinner, but can she be anymore disinterested in her middle child? Yes, dad is an unemployed f*ck up who makes bad investments, but can she at least pretend to encourage his interests? I do enjoy whenever her sister is on screen, though. I loved unni's slow-mo walk to repair the car with two tool boxes in hand! Yes, take charge and show 'em who's boss!

The students and staff at Ju-Kyung's new school are so fun. I love that the bullies are actually just teenage boys posturing around but not effective at anything. (Bonus points for Su-Jin also kicking ass first and asking questions later!) I think I'm going to like the (typical) love triangle between the boys and Ju-Kyung. I'm interested in the boys' backstory, especially with Han Seo-Jun being a big ol' softie behind his tough exterior, but I'm afraid that Su-Ho's famous dad is going to have a major part in it, and I'm totally not interested in adult drama here.

I'm on the edge of my seat and can't wait for more (boo, end-of-year preemption). True Beauty is currently airing on TVN and runs through February 4, 2021.