My Lack of Recaps Lately

I admittedly started this blog to have someone (used loosely here since the Internet isn't exactly a person, but you know) to talk to about kdramas since no such person exists in my social circles.

I intended to do this primarily through recapping airing dramas with some random kdrama news thrown in. But I haven't touched a recap since March-ish, and it has become more of kdrama/kpop/kentertainment news with little recaps at all. Why? Well it isn't because I don't want to recap. I would love to recap my favorite airing dramas.

The problem is that I don't speak Korean. Thanks to my kdrama obsession, I've picked up lots of common words and phrases but I can't piece together an entire conversation by any means. That puts me behind because I have to wait for English subs, and depending on the drama, that could be anywhere between instantaneous and months.

But that doesn't mean I can't recap. The popular shows can get entire episodes subbed in a matter of hours. So what's the real problem?

That, my friends, is the sageuk. And throw in a hypothetical constitutional monarchy for good measure. The difference between banmal, jondaemal, modern speech, era speech is so imperative to these plots. And there is SO MUCH lost in translation into English. 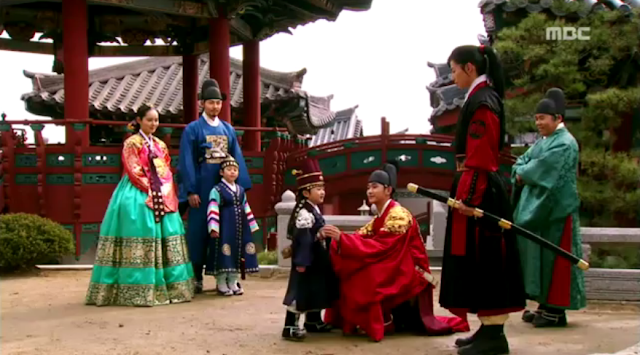 If we were to put the English language into Korean language terms, English is a modern, banmal language. Aside from minor differences between British and American English, it is spoken the same way to all people. Good luck finding someone who speaks Shakespearean or Middle English. And aside from refraining from using slang & profanity, I speak to my supervisors and elders the same way I do to my friends.

This translation barrier is what's making it hard for me to commit to recapping something I may not fully understand. I love, love, love all the sageuks and constitutional monarchy shows that are currently airing. But more than once have I read recaps from native-Korean speakers and found that I totally missed an important note in a show. And being an American English speaker vs a British English speaker also has its drawbacks because we don't have a full understanding of a monarchy since America (as an independent country) has never had a monarchy of any kind. It's just not in our history and we don't get all the nuances that a British viewer might innately understand.

Hopefully some interesting shows will air soon that are not monarchy related so I can get back into the recap groove. Until then, I'll stick with Mid-Season Check-Ins at the halfway point and Series Reviews for finales. In the meantime, I don't mind finding k-entertainment news about my favorite drool-worthy actors and posting beautiful pictures of them.