How exciting! For the lucky ticket holding fans in California, they get to see several hot kpop artists live in concert tonight! 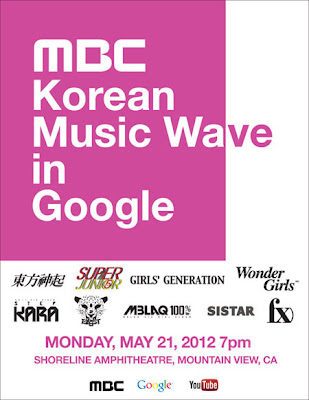 The concert is entitled "MBC Korean Music Wave in Google" and is tonight, May 21st at 7:00 pm Pacific Time at the Google Headquarters. The event is supposedly airing live online as well.


Too bad that it has been damn near impossible to find a non-blog source for this information. Seriously, how do you Google, Google?

Apparently, it will be airing live from their YouTube channel: YouTube Presents. But when I went to that channel, it says that it will be live from 3:00 - 4:30 pm. Um, what? Initially I thought youtube was auto-adjusting to my time zone until I realized that 7 pm Pacific is NOT 3 pm my time. So uh, yeah.

I've also heard that it's going to be broadcast live in Korea, but seeing that I can't read Hangul, it's making it difficult. Typing 방송 (on air) into the MBC search box did not result in a program schedule. I think a "music special" is slated to air tonight on MBC America (which I do not have in my cable package), so I'm assuming it would be the same thing. So I'll be tuned into MBC online and hopefully it'll be streaming there live. They will repost it on their MBC Kpop YouTube channel, but I'm not sure if it will be live or just videos posted later.

Here's to hoping that I'll actually be able to see it live! I hope all the fans in attendance have a blast!