This is a totally lifted story, but I can't not post about my love Kim Hyun-Joong when I come across any news/blurbs/pictures/anything about him! First Impact is the name of KHJ's Concert DVD that shows him preparing for his tour, his concert at the Yokohama Arena in Japan, and bonus features for fans. As concert-like as his Fan Meetings are, I can only imagine what an actual Concert would be like. And by the way, why don't US pop stars have Fan Meetings? Yeah, I know, good luck getting that to spread this way, right?

Kim Hyun Joong’s Japan concert DVD ranked #1 on the Oricon Daily Chart, proving his growing popularity in Japan. The DVD titled “First Impact” was released on May 16. Shortly after its release, the DVD topped both the Oricon DVD daily chart and music DVD charts. ...In particular, it shows never-before-seen footage from the concert rehearsals and performances, as well as his waiting room. 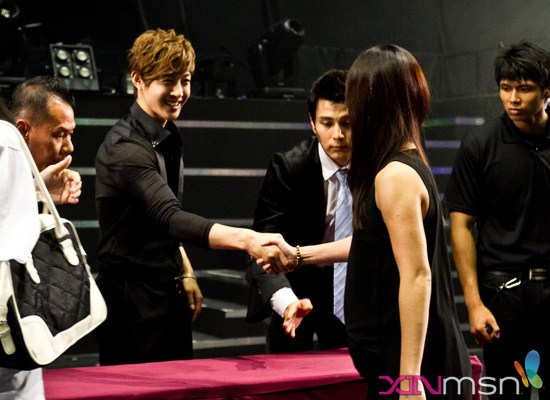 How cool is he? That just makes me ♥ him more. Come Stateside Kim Hyun-Joong so I can lock you in my basement see you in person!