The King: Eternal Monarch is rapidly reaching its end today after a production delay thanks to worldwide virus shut downs. I'm also late to the game, as I only started watching it last week, and I'm also two episodes past the midpoint. But even though everyone has probably talked and theorized this show into the ground, I still want to add my two cents since I'm so intrigued by it. 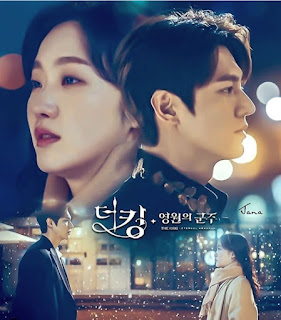 Before I get started rambling, I want to say if you feel that this kdrama is too boring/slow or the romance is unbelievable, just stop watching because this isn't the drama for you. I think a lot of people thought this was going to be a RomCom (I have no idea why) just because it's Lee Min-ho's return to dramas post-military service. Sorry, but there isn't a single broady shower scene. This is more of a mystery drama, so the romance is always going to come second. These are also people in their 30s, so I appreciate that the show wasn't eight weeks of aegyo. This is a drama where you have to think, brush up on your math concepts, and rewatch episodes to pick up on the nuances you missed the first time around. (Especially if you have horrible subtitles. Looking at you, Netflix.) If you *want* to get into it more, though, I suggest going around the kdrama blogverse and finding websites that describe the plot in details versus simply recapping and putting personal feelings at the end. Finding an analytic audience really helps with understanding.

I'm really interested in figuring how this world – er, worlds – works. By episode 10 we know that the portal between the parallel universes is opened by someone having possession of the Manpashikjeok (flute) in whole or in part, and that different people have different entry/exit points. We also are aware of everyone having an alternate in the other world, who may live a completely different life or may not even still be alive.

I'm totally on board with Na-Ri's theory of your alternate must die if you're both living in the same world. I've watched enough Futurama (specifically, "Bender's Big Score" movie) Family Guy (specifically, "Road to the Multiverse" szn 8, ep 1 and "The Big Bang Theory" szn 9, ep 16), and Rick and Morty (specifically, "The Vat of Acid Episode" szn 4, ep 8) to know that. True to the theories of these and many other time travel and parallel universe movies and shows, it's not inherently bad to have both alternates in the same space for a short time, but the alternates simply cannot both live in the same world at the same time. Even if the alternates go to different places in the world, one of them is bound to die.

So that brings me to the question about what will happen with Tae-Eul. Luna is still alive, although it was just revealed that she was released from jail early because she has an illness. But while both of them exist, Tae-Eul can't just hang out in Corea all the time. Although, there are tons of hints that they're star-crossed lovers and they'll never be together. (Eg, Tae-Eul tells Gon that she can't leave her dad and the center, and we don't yet see what her response is to Young's question as to whether she can live as Corea's queen.)

But here is my one gripe with the drama. There is TOO MUCH time jumping in the story telling. I was okay with it at first, but by episode nine, it seems like pieces of the story are thrown together at random. There's nothing wrong with a non-linear story, but at least have a method to the madness. There are some conversations that I think, "Why did we have to wait an episode to hear the rest? "Again, I think it would help if the subtitling was done well or even halfway decent (really, Netflix is horrible at the subtitles and they should be ashamed) or if I knew Korean, but I still think there are issues with the editing.

And something small that someone else pointed out on another blog: the music directing isn't great. Now I'm not much of a music person, and I find the constant stream of music in kdramas to be annoying, but once that was pointed out, I realized how silent some of the important scenes are. Sometimes there does need to be music to nail the point in. I think that would've helped some of the romance watchers feel more secure with the pairing. A few music swells while they talked to one another would've given them a hint that they were falling in love. (Again, not me; I was sold on the couple by episode three.)

But otherwise, I'm on board with the drama. At first I couldn't figure out why no one recognized Lim, but then I realized that the audience is the only ones familiar with his face. Everyone in Corea is expecting him to be an old man. Once he got his base established in Korea, he was faux murdered, and some time passed by (while, presumably, he was in the space between worlds), he could easily walk openly in the streets. I'm so happy that now both teams are aware of each other so that we can really get the plot moving; I think we were at a standstill in episode nine. (Although the Shin-Jae thing was interesting, the audience figured it out a while ago, so that could've been handled quicker.) The first "battle" was a little too anti-climatic for me, so I hope we're gearing up for a real fight.

And I'd be remiss if I didn't mention how much I *love* Eun-Seob as Young shenanigans. When Eun-Seob got caught in the seat belt I was falling over in laughter! I also found it touching when he said that he had to risk his life to protect Gon because Young promised to do the same for Eun-Seob's siblings. Maybe there's some mush underneath Young's hard shell after all. I think the alternate swap, in this case, will result in some very good character growth for the both of them.

Dust off your graphic calculators and check out some quantum mechanics books; time to prepare for the final exam!