Little Women is one of those dramas that is excellent yet somehow misses the mark at the same time. You really need to see it to understand, but I will explain. 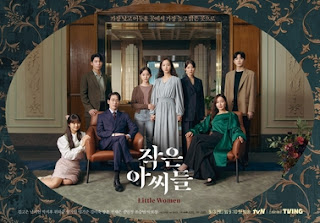 First, the cinematography is beautiful. There are so many scenes where the framing and the juxtaposition of the actors, background, etc, are just perfection. I think this is what really draws viewers in and makes you want to watch the drama regardless of what it's about. There are few shows that excel at cinematography, and this is one of them.

But we can't ignore the plot, and that's where Little Women gets iffy. I will say that the drama doesn't neatly align with the namesake novel. And tbh, I don't really remember all the details from the book since it's been ages since I read it in school. But I treat each drama I watch as a standalone project, which is why I hate spoilers from the source material, so this didn't matter to me.

I believe the story itself was tightly plotted, especially at the beginning. There's a lot going on, but I think that is a benefit. It makes you distrust characters and their motivations, and you know I love a good unreliable narrator. At the same time, the plot twists and turns start losing their luster as the show goes on, because really how many twists does one drama need? Sometimes you just want the story to unfold as it develops.

I do love that none of the characters are perfect. No one is universally good and all have flaws. That also makes individual viewers relate to certain characters and completely hate others. As far as the Oh sisters, personally, I loved the youngest sister, couldn't stand the middle sister, and rooted for the oldest sister even as she kept bumbling along. MANY other watchers felt differently about them.

Oh In-Joo is the oldest sister and arguably had the hardest life. With deadbeat parents, she carried the weight of the family's poverty and the responsibility to keep her sisters afloat. While her sisters each had opportunities to live a wealthy lifestyle and explore their own interests, In-Joo never had that chance. She lived for her sisters and sacrificed herself so they could succeed. She was never that bright or smart and keeps making mistakes, but her heart was in the right place. She learned her lessons very slowly (eg, stop walking around a major city with a bag full of cash and announcing it to everyone!), but I don't think she really grew or changed that much over time.

Oh In-Kyung spent most of her childhood living with their wealthy great aunt who taught her all about finances, and she excelled at it. However, she chose passion over practicality and decided to be a starving artist in the form of a reporter. Although she appeared strong, she drowned herself in alcohol to cope with her problems. I disliked how she was so self-righteous, especially since she somewhat grew up with wealth. She stubbornly wanted to do everything from the ground up, when sometimes, you need to be humble and reassess what you're doing in order to avoid long-term pain. I'm not saying she should've joined Jeongran Society to become a broadcaster (definitely not), but she could've received a small amount help (using her position at her aunt's business to get further ahead and financially stable instead of essentially blowing it off) as it came along.

Oh In-Hye probably had the "easiest" life out of all the sisters. Her sisters sacrificed their financial security and personal interests in order to give In-Hye a better life than they had. They bent over backwards to ensure that she had a "normal" childhood and could spend time with her classmates, having fun, going on class trips, and eating snacks after academy. But In-Hye felt burdened by the overflowing of love and sought financial freedom on her own terms. (Acknowledging that she didn't go about it the best way, but it was the option she had. We must also acknowledge that Won Sang-Ah took advantage of a kid by offering In-Hye a shady job in the first place.) Being the youngest child and having the most stable life gave her privileges her sisters never had, so she was more free to be petulant and stubborn. She wasn't trying to survive like her sisters were; she was just trying to breathe. However, I think she was the smartest of the three because she witnessed how her unnis suffered and knew that their way wasn't the best way to go. That's why when she and Park Hyo-Rin realized they were in a dangerous situation, they got out. (From the start, I felt that her friendship with Hyo-Rin was genuine and they protected each other in a messed up environment.) In-Joo and In-Kyung, on the other hand, dove head first into the fire. In-Hye may not have been appreciative of what she had at first or the best at communication, but she is a teenager and that's how teens process things. 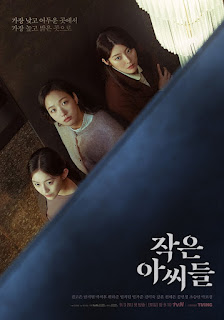 I will say that I was somewhat disappointed in the ending. I truly believe 12 episodes was perfect for this drama, but maaaayyybe it could've had one more episode to tie up loose ends.

I didn't like how Jin Hwa-Young was alive in the end. I suspected from day one that she faked her death, but her being deceased is what propelled our characters forward, and aside from the brief scene in the hospital, there was no evidence that she was alive and actually assumed In-Joo's identity. (How did Sang-Ah and her goons get into the Singapore apartment in In-Joo's name and not notice signs of recent occupancy?) So Hwa-Young's dramatic courtroom entrance didn't have the emotional weight it was supposed to initially. It also felt like the writers shoehorned her revenge plot background in a last-minute attempt to show how they were all connected. But they were already all connected by Sang-Ah's design. So, that fell flat for me.

Choi Do-Il and In-Joo's story line felt... anticlimactic? It was such an awkward airport scene, basically like, "So.... leaving?" "Yup." "Keep in touch?" "Nope." "Uh, okay...." Reflecting now, I'm not sure if Do-il and In-Joo were supposed to have all this romantic tension or if it was just the actors having great chemistry. (Really, Wi Ha-Joon had no business being this hot in the drama, lol.) Also, I hated how In-Joo constantly left him behind (especially without telling him) throughout the show, and it was never addressed. They would be prepared to do something or go somewhere, and she'd just ghost him. So I guess, in the end, it made sense that they didn't end up together? But I wish there was a better resolution or a better written open-ended ending for them.

Also, although I appreciated In-Joo receiving the apartment she wanted from her great aunt, its appearance wasn't well planned and created a plot hole. At the reading of Oh Hye-Seok's will, it was explained that she didn't have any assets and her beneficiaries would only inherit debts. So how did the apartment get involved? And the discussion about paying taxes on it was conveniently added to set up for the money windfall. In-Kyung's upbringing was also wasted at this point, because I feel she could've handled Great Aunt Hye-Seok's estate with ease and come out ahead of her distant relatives who turned their noses up at the inheritance debt.

But for once, I was happy with In-Kyung. Even though I disliked her methods, I was proud of her for finally getting on stage and giving her investigative report without murderous compromise. I also welcomed her getting with Ha Jong-Ho. She initially didn't want to date him because she felt comfortable around him and he didn't make her heart race. And I was like, oh sweet child, love doesn't always need to be thrilling; feeling like someone is home is a deep form of love. However, their kiss was awkward and forced. The dialogue was more of In-Kyung bravely taking a chance on love and deciding to give this a shot, but the action was a make-out scene that was more appropriate for a couple that was actually dating.

Finally, I appreciated that In-Hye was mostly absent from the drama because the violence the Park/Won family inflicted on the sisters was too horrible for a child to bear. (I realize that here absence can cause viewers not like her as much, but again, it was a purposeful action.) I think the final voice over should've been shared between all the sisters instead of being solely narrated by In-Hye. I do understand why she ended up being the one distributing the money, however; In-Kyung would've rejected it and In-Joo would've lost it — again.

It sounds like I feel very negatively about the drama, but I'm more critical because it was such an interesting world. Sometimes, the dramatic plot points and social commentary are what make a drama great. The fact that there are widely different perspectives on this drama, which many people agree is good, shows that it has a solid place in kdrama discourse.

Would I watch it again? Probably not. I'm not the type of person who watches mystery shows again because I already know how it's going to be solved and the twists aren't fun for me anymore. But it was beautiful to watch and I appreciated the characters. Like I said, I believe you really have to see it for yourself and decide if it was worth your time!