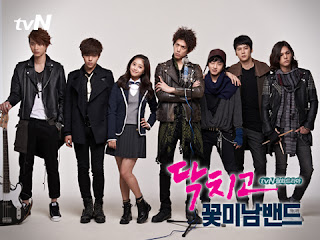 Tonight starts off the week for me in English-subs-viewer-land beginning with Dream High 2 and Shut Up Flower Boy Band. What a way to start off the week.

On the one hand, it's good because we have the awesomeness that is Shut Up Flower Boy Band. But then, we have the awfulness that is Dream High 2. The only reason I'm still watching Dream High 2 is for my loyalty to the series, thanks to the great Dream High. The two can't be compared however, as DH2 has had maybe two decent episodes and 11 crappy ones.

But then there's SUFBB that saves the day. After watching today's (yesterday's?) episode, I'm in pure shock. JiHyuk in tears? Never thought I'd see the day! But it was so heartfelt and genuine, that I was right there with him and his pain. The only major issue I have with SUFBB is that they underutilize Jung Eui-Chul. He was such an awesome actor in Boys Over Flowers and I have been waiting ever since then for him to have an amazing lead role. But his character Seung-Hoon spent most of the show stubbornly brooding. He's finally starting to have some real reactions, but the series is coming to an end, and it's frustrating that EuiChul-ah didn't get his shine. Excitedly, The Moon That Embraces the Sun is coming back this week after being off last week due to the MBC strike. It was hard to find an English site that confirmed it (I tried translating the show into Hangul and Googling it, but that was a major fail, lol), but I found one, and I hope it's legitimate! I'm excited to see how the show ends, especially when they brought up the half-brother fight so late in the game. Hopefully it'll be resolved satisfactorly and won't be a cop-out. Moon/Sun did drag for a bit in the middle, so I'm glad that they're wraping it up. It's time. Thank you for finally getting somewhere, Operation Proposal! Oh-em-gee, I was so tired of Baek-Ho going back to the past only to lose Yi-Seul again! I mean, at this point he still loses her, but at least we're making progress here. I understand that they're trying to show how Baek-Ho has to work hard to change, and nothing happens overnight, and he has to make Yi-Seul realize it too, and he has to thwart Jin-Won, and he's trying to better his own life along the way, but geeze! Enough already! And some of the changes were so minuscule in the grand scheme of things that they could've cut out a jump or two and saved us the trouble. But at least we're back on track. And the series is nearing its end, so let's cross our fingers for Baek-Ho to truly get something out of this!