Oh, Dream High 2, how do you manage to make me loathe you even more? This episode has so much craziness that I'm breaking it up into two parts in order to save my sanity. The first 5 minutes of this episode simply replays the end of the last. The whole theater break up, random kid in street, JB hit by truck thing. 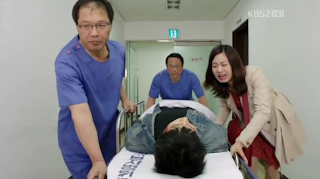 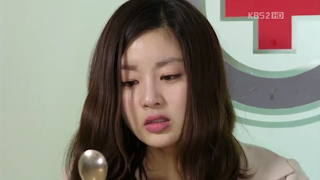 Then it cuts to Hae-Sung loudly wailing (again with the overacting) as JB is wheeled into surgery. The spoon from the Korean chopstick set from Episode 12 falls off of the gurney just before the doors shut. Hae-Sung slides against the wall and cries. 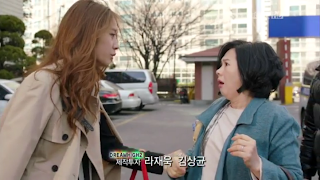 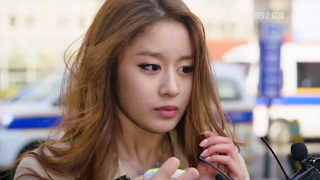 Rian's mom steps out of a police van, being escorted into the station with other criminals. Rian runs up to her mom angrily asking her why she did what she did. Mom cries an apology and Rian tells her it's a misunderstanding and it'll all be figured out soon. The police haul Mom off, and reporters swarm Rian. She stands dumbfounded, and then gets the news via text that JB's in the hospital. She continues to stand dumbfounded. 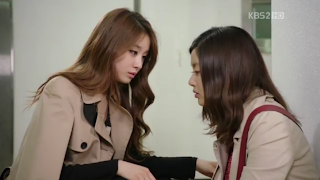 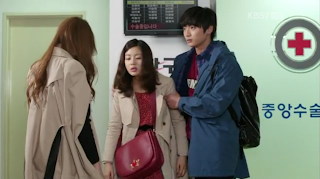 Rian rushes into the ER and finds Hae-Sung still crumpled on the floor. Nevermind that Si-Woo sent Rian the text message yet is nowhere to be found, and that Hae-Sung obviously hasn't moved from that spot since she arrived to contact anyone. Rian yells at Hae-Sung for having the audacity to cry over JB after promising to protect him. She warns Hae-Sung to stay away from him. Hae-Sung just sits and takes the bashing, tears flowing down her face. Yoo-Jin arrives with the others and he tells Rian that's enough. 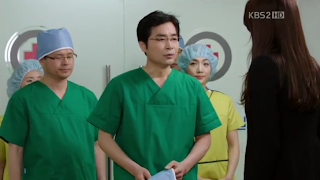 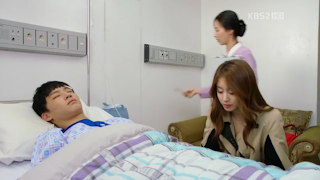 The surgeon comes out and tells Teacher Hyun that everything went well ...except that JB has a torn ACL, but that shouldn't be a problem unless he's an athlete, right? *sigh* Rian sits crying over the unconscious JB in his hospital room. The nurse walks in and sets down the Episode 12 Korean chopstick set on the dresser. Meanwhile, Hae-Sung stumbles out of the hospital. Yoo-Jin tries to help her walk, but she shakes him off and continues stumbling down the street alone. 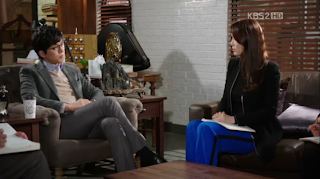 Back at school, Producer Shin announces to the faculty that the audition will still go on. Teacher Hyun protests, but Shin has none of it. JB was disqualified from the competition anyway, so it doesn't matter if he's in the hospital. Hyun tries to say that the other kids will be worried. Shin counters that JB wasn't even at his father's deathbed due to a performance, so the show must go on. Ouch. 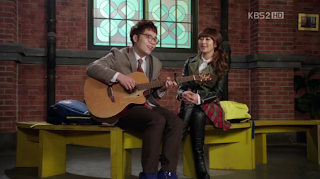 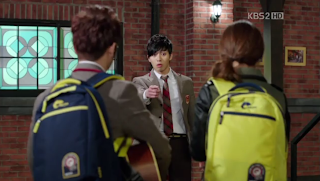 Nana sings while Hong-Joo plays the guitar. Flashbacks during the song to other times the two were together. Si-Woo notices them and busts into the room, asking why they're alone together. He then looks and sees that Hong-Joo and Nana have matching bookbags. Si-Woo panics as Hong-Joo smugly states that Nana got it for him. Ha! Now this is a love-triangle-budding-bromance-coupling I can get with. 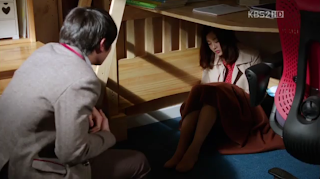 Yoo-Jin goes looking for Hae-Sung in her room, and finds her sleeping under the desk/loft. She wakes up, but continues to be non-responsive. He tells her that JB is awake, and that he'll go with her to see him. Hae-Sung stubbornly stays put and Yoo-Jin carries her out from under the desk and eventually into the hall. She still stands there in a spaced out funk and refuses to go. You know what? I'm already tired of Hae-Sung's attitude and it's only 15 minutes into the episode. 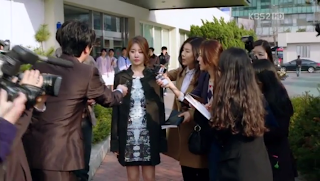 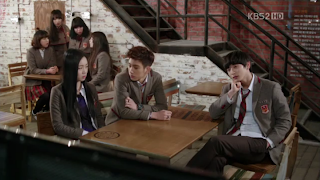 Rian walks out of the hospital and is bombarded by reporters. Annoyed and frustrated, she stops and announces that she'll tell them everything. A hush falls over the crowd as they set up for her to speak. She gives a very scripted-like, typical idol speech about how it's tough for her family, how they're all persevering, and that JB's a good friend that she wants to see get better. Meanwhile, watching the news back at school, Ui-Bong, Seul, and Yoo-Jin marvel at how much Rian must care for her mother since she's not her usual evil self when her mom comes in the picture. 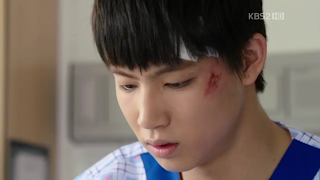 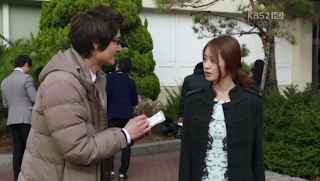 Meanwhile again, JB wakes up. Huh? Didn't Yoo-Jin say he already woke up? Anyway, JB wakes up and momentarily freaks out, not knowing where he is. He then notices his leg is in a cast and has a silent panic attack. He notices the complete chopstick set on his dresser. JB looks up at the TV (that's been on while the patient was unconscious?) and watches Rian's interview. As it ends, a cheeky reporter pulls Rian aside and says that his job will be easier if she's always nice like this. He asks for more details about JB's condition, since it's rumored that JB will have a hard time getting back on the stage. Rian excuses herself and runs back into the hospital. 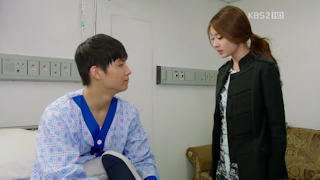 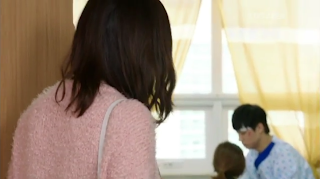 Rian enters JB's room, and he quickly covers his leg back up. She starts hitting him, and JB calmly takes it, asking her what's wrong. Tears falling, she throws his shoe at him and orders him to put it on and get up. JB brushes it off, and acts like everything is just fine. I actually feel the emotion of JB putting on a strong face even though he's completely devastated. Where has all this good acting been the past 13 episodes?! Hae-Sung finally decides to show up, but walks in while Rian breaks down at JB's bedside. Hae-Sung leaves without announcing her presence. Idiot. 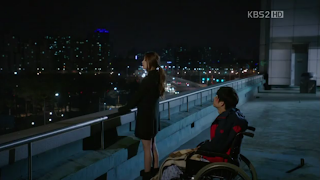 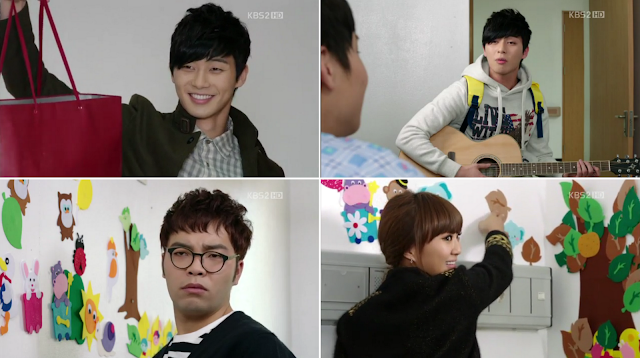 Montage follows with the matching backpack crew: Si-Woo, Hong-Jo, and Nana, visiting JB and cheering him up (reenacting when Nana was in the hospital), followed by JB trying to walk without his crutch and falling multiple times.I get that he's determined to get better and get back on the stage, but dude, it's only been a day or two. And you're still in a full leg cast. Walking is not going to work yet, my friend. 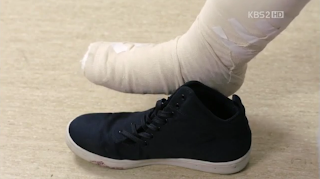 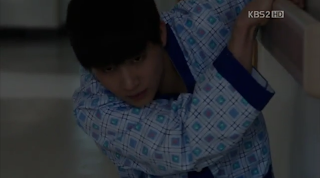 Yes, we're only halfway through the episode. More to come in Part Two...